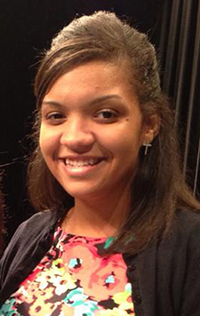 One year ago Kaysha Lampkins was attending class as a sophomore at UNC-Chapel Hill, unaware that her life was about to change.

“I was sitting in class, and I stood up and I looked down at my feet, and they were huge. My feet have never been so swollen before,” said Lampkins.

She says that after calling her mom, then staying to take an exam, Lampkins promptly visited the Morehead Memorial Hospital in her hometown of Eden, North Carolina.

Bloodwork and urine testing pointed to a kidney problem, but the medical team could not yet determine the cause.

It wasn’t until undergoing a kidney biopsy at UNC that she received her official diagnosis: Focal Segmental Glomerular Sclerosis (FSGS). FSGS damages the filters (glomeruli) in the kidney and causes protein to spill out of the kidney and into the urine (proteinuria).

Since then, 20-year-old Lampkins has been seeing Drs. Katherine Falk and Ryan Sanford at the UNC Kidney Center for her care.

“It’s been great—they’ve been really helpful. They keep me calm. I do stress a lot about my future.”

“I see Dr. Sanford most of the time, so he’s really nice about not just being a doctor, but also e-mailing me and being a friend, seeing how I ‘m doing. “

Lampkins reports that while her FSGS has permanently damaged her kidneys, her condition is stable, and she continues to study at UNC where she is currently a Junior.

She says that living with a chronic health condition has helped her to focus more on academics, family, friends and enjoying the time she has in college.

“It’s a journey, I’m still trying to figure it all out. I thought it would be way worse. If you had asked me how I was doing in December of last year, yeah, my mind was all over the place– it was really stressful. But it’s just something I’m going through. It’s getting a lot easier, actually.”

Lampkins says that her low energy level is her main symptom.

“The only problem I ever really have is I get really tired easily. Like walking across campus, or doing things with my friends that I used to do. But other than that, I really don’t have many problems. I am blessed that I haven’t had lots of symptoms.”

She keeps a positive attitude, but acknowledges that this has changed her life.

“It hasn’t been a rough road, but it’s been a change. It’s been really life changing to realize you have to do better with your eating habits and exercise and take care of yourself.”

Lampkins says that she has reached out for support and helpful information on the NephCure Foundation web site, and recently walked in the NephCure Raleigh walk on October 12. She describes that as a positive experience, to be around others who are also affected by the disease. 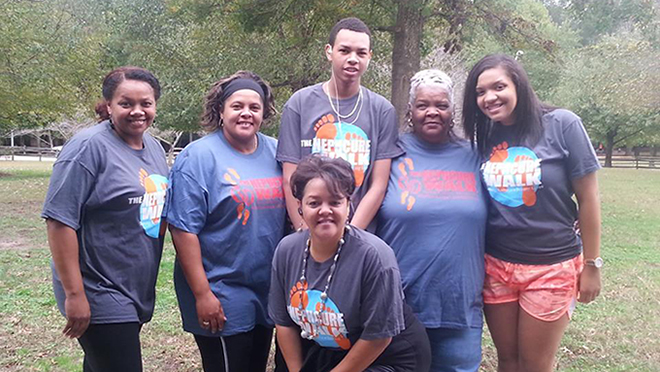 “I also met someone who had FSGS who is currently in remission, so that’s encouraging too,” she said.

She has expressed an interest in helping others in the future who are affected by the disease, through raising awareness and supporting families of affected individuals.

Clara Neyhart, co-founder of the scholarship with her husband, Greg, says that kidney disease creates physical, psychological and financial burdens.

Neyhart says that Lampkins has demonstrated determination to move forward with a clear plan for her future, in spite of the burdens that her condition has placed on her.

“Kaysha Lampkins had to reevaluate her life and adjust to her illness while pursuing a college education, working, and engaging in service to others. She shows a great will to succeed and maintains a very positive attitude. “

Lampkins was surprised at the news that she had been selected for the scholarship.

“That was a blessing. It’s really hard, the bills that I had, it’s been very expensive. It just really shocked me. It was just an honor.”