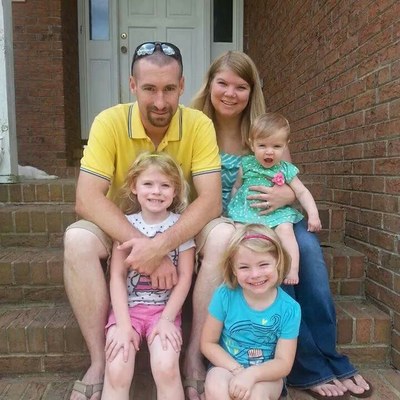 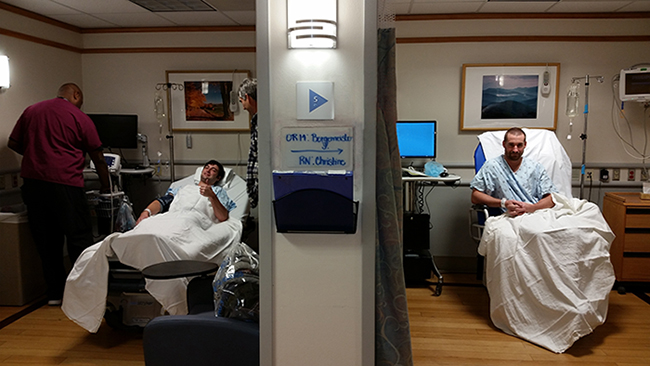 On December 2, people across the nation celebrated Giving Tuesday, a day dedicated to service and giving back. That morning, Justin Borgemeister received the ultimate gift, a kidney transplant from his younger brother.

It was still dark the morning of December 2 when Justin Borgemeister arrived at UNC Hospitals to receive a long awaited kidney transplant.

Hours later, in recovery, when his wife, Susan, saw him for the first time, she couldn’t believe the light in his face.

“It was incredible,” she said. “I thought he’d be so pale, but I could already see him starting to come back. The color in his face was like before he was sick, like when we first met.”

Justin hadn’t been feeling like himself for a few years when, in 2012, he was diagnosed with Focal Segmental Glomerulosclerosis (FSGS) and IgA nephropathy, two common forms of kidney disease. He was only 28 at the time of his diagnosis. Since then, he has weathered pain, nausea and intense fatigue. Despite many different treatment methods, his kidney function continued to deteriorate. It became obvious that a transplant would be required.

Early this year, in February, Justin was placed on the transplant waiting list. For the past several months, he has undergone dialysis three days a week near the family’s home in Concord. The process often leaves him physically weak and exhausted. He had to take a leave of absence from work.

In November, however, his luck began to change when his younger brother Kyle was confirmed as a donor match and transplant surgery was scheduled.

Although the process to transplant was long and difficult, he’s fought to be the best dad he can be for the family’s three young daughters, Abby, Chelsea and Lyla, all under the age of six.

“Justin’s been sick pretty much their whole lives,” Susan said. “I told them, ‘if you think daddy is fun now, you just wait until he gets his new kidney.’”

For Kyle, his nieces were all the inspiration he needed when he was going through the complicated testing process to confirm that he was a donor match.

“I love Justin and Susie, but I did this for those little girls,” Kyle said. “I did it for my nieces.”

The gift of transplant could not have come at a more appropriate time. The 2nd of December – the day Justin received his transplant – was “Giving Tuesday,” a national day dedicated to giving back. It was also only a few days after Justin’s 30th birthday.

“Having this happen on ‘Giving Tuesday’ is pretty cool,” Justin said. “And of course it’s the best birthday and Christmas gift I could ask for.”

“We know that kidneys from living donors tend to do better and last longer because we are limiting the amount of time that the organ is outside the body,” she said. “Plus, the waiting list for a donation from a deceased donor can be as long as five to six years.”

The process wasn’t always easy for Kyle, who underwent a battery of tests in advance of the procedure.

Waiting for the test results caused Kyle some sleepless nights, he admits, but also prompted him to get serious about his health and quit smoking.

A few days removed from the transplant surgery, performed by Alexander Toledo, MD, Justin had already been discharged, but Kyle remained in some discomfort.

“As awesome as it’s been to see Justin feeling so much better, it has been equally hard seeing Kyle in pain,” Susan said. “It was just so difficult since he’s done this amazing thing for our family and for Justin.”

This is typical in transplant cases.

“In very simple terms, the person who is receiving the kidney is sick,” said Woodard. “They have kidney disease and we are giving them a healthy, functioning organ. On the other hand, the donor is a very healthy person, so putting their body through this change can be challenging.”

Justin and Susan remained by Kyle’s side until his discharge, two days after his brother.

Justin was amazed at how quickly he was feeling better after the surgery, calling his experience at UNC “top-notch.”

“The first day and a half was obviously tough, but I could feel my body coming back around,” Justin said. “By day three, I was doing laps around the hallway, pretty much moving around on my own.”

The Borgemeister brothers still have weeks of recovery ahead of them and are under strict restrictions regarding their activities. When they get the “all clear,” though, Kyle said the first thing they’ll do is grab their tools.

For Justin, his truck and his three young daughters should keep him plenty busy during the months and years ahead. But, for now, he, Susan and the entire Borgemeister family are simply grateful to spend the holidays together, happy and healthy.

ustin (L) and Kyle (R) Borgemeister after the transplant surgery.