The Neyhart Scholarship was established by Clara and Greg Neyhart in 2010, and this will be the second award. 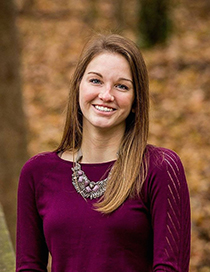 These were the words that Sarah McBride heard in November of 2012, at her first visit to the UNC Kidney Center clinic with nephrologist Dr. Patrick Nachman.

McBride, then 20 years old, had recently been diagnosed with a type of ANCA vasculitis called GPA (Granulomatosis with polyangiitis).

“It blew me away how fast everything went from there,” said McBride.

After being put on high doses of medications, then monitored for 48 hours at the hospital, she continued to receive treatments.

Things seemed to settle down for a while, but then a new symptom appeared, which meant more medication and monitoring.

“It’s been a long 18 months,” she said, but “everything it looking really good right now, fingers crossed.”

McBride has been managing her disease while continuing to be a college student at UNC-Greensboro. She is currently working on a degree in Nutrition and Dietetics at UNC-Greensboro and has 2 years left.

McBride said that her faith, family and friends have helped her through this difficult time. She said that keeping a positive outlook has also helped.

“The best way to put it is that my positive attitude has helped me through all. Because If I just sat down and let it overwhelm me and consume me, then I wouldn’t be able to keep doing what I do. “

Clara Neyhart, co-founder of the scholarship with her husband, Greg, took notice of McBride’s positive mind-set. She said that McBride has maintained a “great sense of humor and optimism,” in spite of her difficult and expensive medical course.

“Sarah has been persistent and determined to reach her educational and life goals in spite of her disease. She has done so with great grace and a positive attitude. She is an inspiration, especially for young people with kidney disease.”

McBride said that when Neyhart delivered the news to her that she had been awarded the scholarship, she was thrilled- “I couldn’t thank her and her husband enough,” she remarked.

She said that she hopes to earn a dietetic internship after graduation, and also plans to work with kidney patients.

“It would be great to be able to give back,” she said.

From right: Sarah McBride, with her mother, Sharon and her friend Davis, at this year’s Kidney Kare 5K