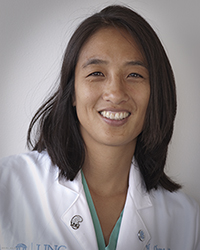 The top four presenters in basic science and clinical categories were selected from the Mid-Atlantic region to present at the national forum.

Dr. Chang will be the first representative from the University of North Carolina to present among other kidney researchers at the national forum.

Dr. Gerald Hladik, the Director of the Nephrology Training Program at the UNC Kidney Center, said that Dr. Chang “possesses the essential qualities of resilience and perseverance required to succeed in a research career,” which he noted is increasingly challenging as a result of dwindling NIH funds and increased competition in the field.

“Dr. Chang’s enthusiasm for research, fortunately, has not been swayed, and she has shown unremitting intellectual curiosity and dedication to improve the lives of individuals afflicted with kidney disease through scientific discovery,” said Hladik.

“The future of nephrology depends on individuals like Dr. Chang who are able to withstand the wave of increased risk and uncertainty inherent in research, and we are blessed to have Dr. Chang among our ranks,” said Dr. Hladik.

Dr. Chang completed an adult nephrology fellowship at the UNC Kidney Center in 2012. The abstract receiving recognition is titled “Palladin Contributes to Normal Migration of Tubular Epithelial Cells After Injury.”Her current research focuses on the role of palladin, a cytoskeletal protein previously studied mostly in cancers, in kidney disease. She said that she plans to expand her research to encompass imaging modalities for kidney disease.