David Cole, a kidney transplant recipient and UNC patient, has been featured in the Medical Foundation of North Carolina’s Annual Report for his efforts in advocacy for organ donation and kidney disease awareness. 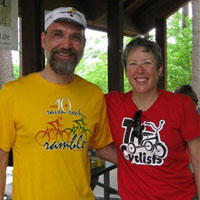 An avid cyclist in peak physical condition, David Cole was shocked when diagnosed with IgA nephropathy during a routine doctor appointment in 1997. A disease affecting the kidney’s ability to filter waste, IgA quickly escalated from a nuisance into a debilitating condition just four years after Cole was first diagnosed. Despite initial hesitation, Cole underwent a kidney transplant in March of 2001.

Under the care of UNC Kidney Center Director Dr. Ronald Falk, Cole experienced a quick recovery and participated in 100-mile bike rides just six months after his surgery. Shortly after returning to cycling, Cole was back to his initial performance level and even set a new personal record.

Cole now is an advocate of kidney transplants across the state and works to spread the word about kidney disease and organ transplants. Shortly after his recovery, he decided to create a premier cycling event to raise awareness about organ donation and raise money for the National Kidney Foundation and U.S. Transplant Games. Depending almost entirely on registration fees and personal donations, Cole has managed to raise over $16,000 in each of the last two years.

In 2010, Cole redirected the proceeds to the UNC Kidney Center, enthusiastic about helping kidney patients in the North Carolina area. Today the Raven Rock Ramble, a cycling event taking place in the four-county area surrounding Raven Rock State Park, is a very popular ride benefiting both the UNC Kidney Center and the entire transplant community.