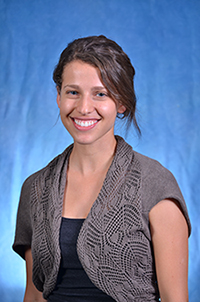 The grant will fund her current project, “The relationship between health/functional literacy and hospitalizations for children, adolescents and young adults with CKD3”, starting in May and ending October 17 of this year. The research grant will culminate in a presentation for Levine at the ASN annual meeting, which takes place in November.

“Robyn is an inquisitive young investigator, whose passion for improving the care of patients with chronic kidney disease is reflected in her research work. Her research award from the ASN is well deserved!” said Dr. Maria Ferris.

Dr. Ferris is Levine’s research mentor, a relationship established earlier this year through Kidney TREKS (Tutored Research and Education for Kidney Scholars), a week-long research retreat program instituted by the ASN, in which Levine took part.

Since then, Levine has been collaborating and highly involved with the UNC Kidney Center. She said that Dr. Ferris has been a great mentor to her, and that many other students have been helpful and supportive.

Levine says that since getting connected with the Kidney Center she experienced an “outpouring of people willing to help and show me exciting things and let me participate in different parts of projects. I’m just really thankful for everyone who’s helped me out.”

Levine, who is originally from Miami, Florida, is in her 2nd year of medical school at UNC, where she also earned her undergraduate degree.

While Levine was in high school, she saw him going through dialysis, and eventually a kidney transplant.

Her stepfather currently is on dialysis again and hoping for a new kidney.

“It’s really been life changing, for my stepdad,” said Levine.

“He was probably the most active person that I know. He’s run 20 marathons in his life. He’s gone on multiple 3-4 week bike rides, scuba dives. This was all prior to dialysis.

“It’s just been really limiting for someone who prided himself on being active and exploring the world. He has to be in a chair, 3 days a week for about 4 hours, so that really kind of limits how much he can travel.”

Levine says that while his energy is often low after dialysis, her stepfather and her mother try to travel together and find dialysis centers near their vacation destinations. Her mother was tested as a possible transplant donor, but is not a match.

Earlier this year, Levine’s stepbrother was tested for being a possible transplant match for his father, and discovered that he had inherited the disease. Levine said that he has not needed dialysis yet.

While Levine hasn’t yet officially decided what field she will go into, the field of nephrology looks promising.

Clinical rotations will not start for her until next year, and she said that it’s “hard to get a sense of what you want to do until you actually practice it, but I know this is an area that I’m interested in, so I want to explore that further.”