Clinical trials that study kidney disease usually use end-stage kidney disease (having to go on dialysis or receive a kidney transplant) as the primary outcome, or end point, of a study. For many kidney diseases such as those associated with nephrotic syndrome (heavy protein loss in the urine), end stage kidney disease (ESKD) may not occur for several years, sometimes 10 years or more. This long course make it very difficult to evaluate the efficacy of treatments in preventing ESKD. 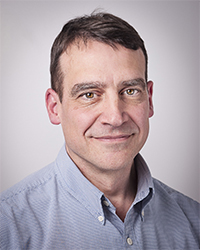 A new paper published this week in the Journal of the American Society of Nephrology (JASN) has evaluated earlier end points, called surrogate end points, that could be used in clinical trials testing new drugs for membranous nephropathy, a kidney disease that affects the filters (glomeruli) in the kidney.

One of the authors of the paper, UNC Kidney Center’s Patrick Nachman, MD, explained that surrogate end points, happening before a patient reaches ESKD, have not been established for clinical trials involving glomerular disease.

“The questions are, what are those surrogate end points, and how do you determine what they are? They have to meet certain criteria so that the Federal Drug Administration (FDA) feels confident that they can predict the prevention of the end point that you want to prove. So for glomerular diseases those surrogate end points have not been established in a way that the FDA supports for a clinical trial,” explained Dr. Nachman.

Dr. Aliza Thompson, Dr. Daniel Cattran, Dr. Melanie Blank and Dr. Nachman reviewed years of literature and data specific to treatment of membranous nephropathy to see if reduction of protein loss in the urine, also known as proteinuria, could be used as a surrogate end point in clinical trials.

Their paper suggests that complete remission, defined as a complete disappearance of proteinuria, can be used as a surrogate end point in clinical trial design. It also suggests that partial remission, defined as a halving in proteinuria to a level less than 3.5 g per day, was reasonably likely to predict a benefit of treatment in preventing ESKD. A partial remission could therefore be used as a surrogate end point under the FDA’s “accelerated approval” program. The benefit of treatments approved under this program must be confirmed in additionalpost-marketing trialse.

This work will help the field of clinical trials related to kidney disease. Dr. Nachman stated that clinical drug development in nephrology “trails far behind other fields of medicine.”

“There are a number of reasons why that is. One of them is because of this issue in many kidney diseases, the end point is years down the road and the surrogate end points are not well-defined,” he said.

The paper, “Complete and Partial Remission as Surrogate End Points in Membranous Nephropathy,” is available online to JASN subscribers here.
The abstract is available here.