An article published on the Higher Education Works Foundation highlights the kidney transplant story of UNC patient Kevin Howell and donor Lindsay Recchie. Howell, who is the Senior Vice President of External Affairs for the UNC system, is a patient of Dr. Falk. When he needed a kidney transplant, Lindsay Recchie, also a UNC system employee, stepped up to donate. She received the Governor’s Award for Excellence for the gift of her kidney to a co-worker. 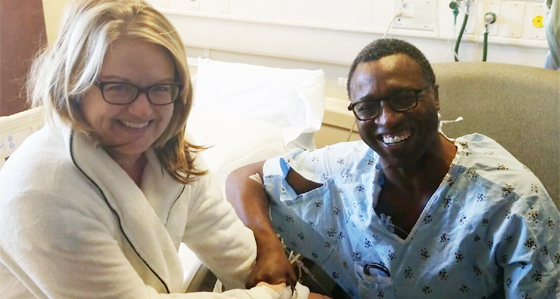 Howell, who’d spent 10 years as NC State University’s liaison with the General Assembly, told his friend Andy Willis that Friday that he didn’t feel well and suspected his kidneys were malfunctioning.

Willis, the chief of staff at UNC Health Care, immediately put Howell in touch with Dr. Ronald Falk, Chair of the Department of Medicine at UNC, who had seen Howell before. Howell drove himself directly to the hospital in Chapel Hill for a blood test – and Falk soon had terrible news.

“He said, ‘Kevin, your kidneys have failed – both of them,’” Howell said. “From that moment, October 30th, my life changed.”

“Because kidney disease is a silent disease, he didn’t know how sick he had gotten,” said Dr. Falk. Howell’s creatinine level – a measure of kidney function – was “bizarrely high.”

Howell was admitted to the hospital. Nurses came to visit because they’d never seen a living patient with a creatinine score so high.

Falk advised him to start looking for a kidney donor. He immediately began having four-hour dialysis sessions – and wondering whether he would see his teen-aged daughters become young women.

AT A STAFF meeting the following Monday at Holladay Hall – NC State’s main administrative building – the staff was told Kevin Howell was in the hospital, he needed a kidney, and the donor needed to have O-positive blood. Everyone was shocked, and at least 40 people made inquiries about how to get screened.

Woodson’s assistant, Lindsay Recchie, was likewise shocked – Kevin worked out, ate right, and seemed one of the healthiest people she knew.

She went straight to her husband Ralph’s office nearby to discuss it. Though she had signed the organ-donor box on her driver’s license, she’d never heard of live donors giving organs.