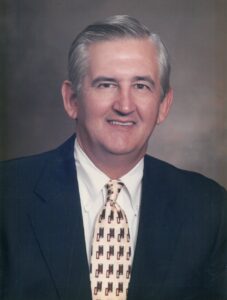 Dr. Russell was a true Tarheel. He loved his community and his state. He earned his undergraduate and medical degrees from UNC.  He was an outstanding athlete and swimmer—so much so that he was offered a position on the UNC swim team. However, he declined this opportunity to complete his undergraduate degree in just three years in order to accelerate his medical training.

He graduated from UNC School of Medicine in 1969, followed by training in internal medicine and nephrology at UNC. He also had the distinction of being the first clinical nephrology fellow at UNC. During his fellowship, Dr. Russell worked closely with Dr. Louis Welt, then chair of the department of medicine. After Dr. Welt migrated from Chapel Hill to become chair of the department of medicine at Yale, he invited Dr. Russell to follow him. Dr. Roger Lamanna, a long-time colleague at both Chapel Hill and Wilson, recalled him saying he was “very impressed with the program [at Yale], but turned down the offer because he couldn’t see making his bird dog, Deacon, live in a big city.”

Following fellowship, he served as a Major in the United States Army Medical Corps at Fort Gordon in Augusta, Georgia. While at Fort Gordon, he established the dialysis program and was also assigned as personal physician to Mamie Eisenhower.  In 1975, he and his family moved to Wilson, NC. There, he opened his private practice specializing in internal medicine and nephrology.

For over 30 years, Dr. Russell invested his time and energy serving the people of eastern North Carolina. He was honored with the UNC School of Medicine Distinguished Service Award in 1993. He made significant contributions to improving care and outcomes of patients with kidney disease in an often underserved area of the state. He also established several dialysis centers that have provided the highest level of treatment for people suffering from end-stage renal disease. His service to his patients and the community inspired generations of UNC nephrology fellows that followed.

“Joe was an old school nephrologist,” said Dr. Lamanna, professor of medicine in the division of nephrology and hypertension. “He trained at a time when the physician had to be doctor, dialysis nurse, and technician. This gave him a keen insight into how to run a dialysis unit. In Wilson, he trained the nurses and technicians from the ground up. As dialysis became more corporate, these staff members were snatched up as regional managers. His fairness and generosity to his staff created a strong allegiance and a conscientious work ethic in the dialysis unit.”

“Joe was also a tireless physician who kept up with the changes in the practice of nephrology,” said Dr. Lamanna.  “He never lost sight of his mantra ‘What you do for the patient is more important that what you do to the patient.’ Above all, Joe loved people. He loved his family, his staff, and his patients. He had boundless energy and affected many lives in a meaningful way.”

An obituary can be found in the Raleigh News & Observer .