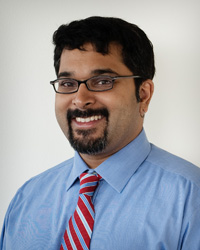 This study was published in the January edition of the Journal of the American Society of Nephrology (JASN).

Dr. Derebail and his collaborators looked at the doses of anemia medications given to African-American dialysis patients. Their investigation was built on previous research in 2009 also led by Dr. Derebail at the UNC Kidney Center, which found a high prevalence of sickle cell trait among African American dialysis patients, a rate that was twice that of the sickle cell trait found in African Americans in the general population.

The results from that study prompted researchers to see how the trait affects people who have anemia, which often occurs in kidney patients. Anemia causes fatigue, among other complications in the kidney patient, and patients are routinely given ESAs, or Erythropoiesis Stimulating Agents, to help their bodies produce the hemoglobin needed to reduce the symptoms of anemia.

“The goal was to see how much more of the ESAs patients with sickle cell trait were getting relative to those without it,” said Dr. Derebail.

The study found that patients who had sickle cell trait received 13% higher doses of ESAs compared to patients who did not have the trait.

The results of this study could help explain why African American dialysis patients historically have received more ESA medications than Caucasian patients. The cause for this occurrence is something that the medical community has not yet been able to determine.

“People have been looking for reasons to explain why that happens. So our findings could explain part of it,” said Derebail.

He also suggested that research should be done to see if sickle cell trait could be a risk factor for kidney disease. This study found that 10% of the participants had sickle cell trait, which is higher than the presence of the trait in the general African American population, around 6.5%-8.7%.

“If so, can we detect kidney disease earlier in that group so we can reduce the chance they progress all the way to end-stage kidney disease?“