Cryoglobulins are proteins that are normally dissolved in blood, but become solid or gel-like at cold temperatures (less than 98.6° F). Cryoglobulinemia simply means that these abnormal proteins are in the blood.

When these proteins are in their solid form they can physically block blood vessels throughout the body. They can also attach to antibodies to cause vasculitis (swelling of the blood vessels).

Most people have two kidneys, which are located on either side of the lower back. All of your blood passes through the kidneys many times per day. In the kidney, blood is filtered by small units called glomeruli. These units clean the blood and remove extra water from your body in the form of urine.

Under a microscope, in types II and III the glomeruli sample usually shows a thickening of the capillary walls in the glomeruli and an increased number of cells. Sometimes we see blockage of the capillary loops from tiny clots formed by the loose cryoglobulins. Below is a picture of a glomerulus changed by this disease. 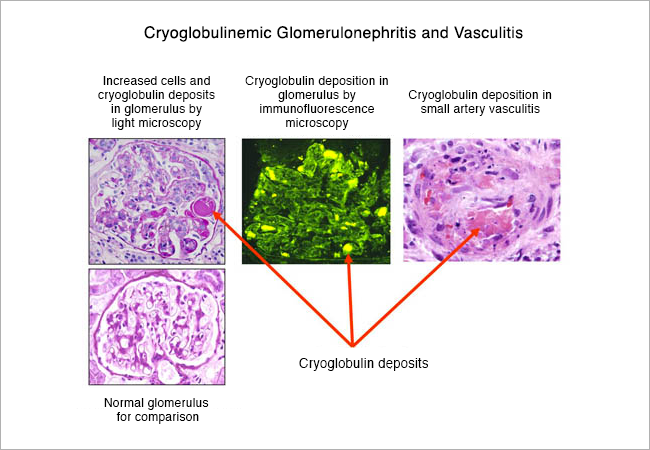 Type I cryoglobulinemia less commonly involves the kidney. This can occur by forming clots, or very rarely by a thickening of the capillary walls in the glomeruli and an increased number of cells.

Type I occurs at the same time as cancers of the blood and immune system. Multiple myeloma, chronic lymphocytic leukemia and Waldenstrom’s macroglobulinemia are all cancers of this type.

Types II and III are associated with diseases that have chronic internal swelling. These diseases include autoimmune diseases such as systemic lupus erythematosus or Sjogren’s syndrome, and viruses such as hepatitis C or HIV.

The symptoms in type I occur because the blood is abnormally thick due to a high level of blood proteins. This can even lead to blood clots, or thrombosis. Skin symptoms are common. Raynaud’s phenomenon is a discoloration of the fingers and toes that happens when they are exposed to a change in temperature. Purpura are purple spotted rashes on the legs. Livedo reticularis is a blotchy purplish discoloration of the skin caused by impaired circulation. Acrocyanosis is blueness of the hands and feet that appear when small arteries toward the end of fingers and toes are blocked. Even gangrene can be present, which is a death of tissue from poor blood flow.

Neurologic symptoms can occur due to reduced blood flow to the brain. These symptoms can include dizziness, double vision, sudden deafness, confusion, dementia, stroke, and coma.

Types II and III can cause joint pains, particularly in the hands, knees, and ankles. Purpura is common, as with type I disease. Patients may have tingling or weakness of the nerves. The lungs can be involved, with shortness of breath, cough, and chest pain. Other symptoms may include stomach pain, enlargement of the liver, spleen, or lymph nodes. If the kidneys are affected, patients may have blood or protein in the urine.

How is Cryoglobulinemia diagnosed?

Depending on your symptoms, a doctor may order any of the following tests:

Other tests:
*Skin sample of affected areas
*Urinalysis to look for blood and protein in the urine
*Urine protein electrophoresis
*Kidney sample

Treatment of cryoglobulinemia itself depends on how severe the disease is. Mild disease, without signs of damage to the kidney or other organs, can be treated with non-steroidal anti-inflammatory drugs such as ibuprofen. For moderate or severe disease that affects the kidney or other organs, treatment includes corticosteroids (prednisone, methylprednisolone, Medrol) to reduce internal swelling. Other drugs that suppress the immune system, such as cyclophosphamide or rituximab are used as well. Plasmapheresis may also be used, which is a treatment that physically removes the cryoglobulins by filtering the blood.